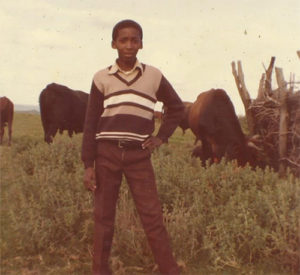 In 1980 a South African man was on vacation with his family in the Transkei Area. During his stay he met a young boy named Gerald, who offered his assistance to the family regarding minor chores. Moreover, the child looked polite and willing to participate in any task. Although, he was only 10 years old, he had never missed even 1 day of work. As time passed, the family started getting concerned that the youngster seemed to have lack of nutrition and therefore they started supplying him with the necessary food. Since the man and his wife had returned to the cottage for their holiday every year, Gerald continued help them with menial tasks during their stay. 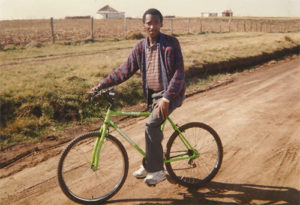 Year after year Gerald offered his assistance to the family and therefore they developed a relationship and started getting to know each other better. Unfortunately, during these visits they discovered that Gerald’s father passed away and that his mother was walking 20km to and from work to a coastal hotel, in order to earn some money for her children. However, her salary was insufficient to support the entire family or to be able to pay for her son’s education. As a result, the young boy was not able to attend school. Fortunately, the South African and his wife saw the motivation and the willingness of Gerald’s behaviour to become a good educated person, so they decided to support him financially to complete his secondary education. The support included school fees, books and pocket money. 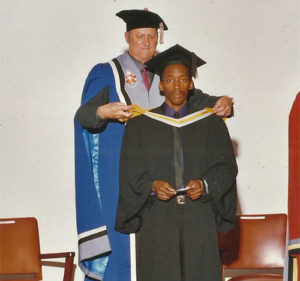 Since the family was returning to the same holiday destination every year and the boy was helping them with chores, they were able to follow the progress of the youngster. Luckily, Gerald completed his secondary education and even exceeded their expectations. For that reason, the family was more than willing to help Gerald to cover the expenses of his higher education. With their assistance Gerald went to a University and later on, he successfully qualified as a Teacher. His first position as a teacher was at Cebe Secondary School, close to his home. After 20 years as a teacher at this school, in 2015, Gerald was appointed as the present Headmaster of Cebe Secondary School. 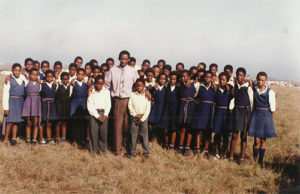 The man who is standing in this photograph is Gerald. What he became is the result of individuals’ commitment and assistance. We provide you with this successful story, due to the fact that we believe that everybody deserves an equal chance in life and to enjoy an education, which enables them with necessary opportunity to become the best version of their potential.

The Townships Foundation has been established to help children in a similar position to Gerald to give them the opportunity for a brighter and better future. We believe that with united efforts all over the world, we can provide opportunities for the development of children such as Gerald to become good, educated persons who will help grow our society and become independent contributors.